Cleaning is a complex process, the success of which is influenced significantly by several factors:

The chemistry, in this case meaning the cleaning agents used, helps in the decomposition of dirt components and thus simplifies the removal of dirt from surfaces. The detergents contained in cleaning agents improve the wetting of the item to be cleaned and the dirt carrying capacity of the water. This means that it is possible to prevent new deposits of dirt on the surfaces to be cleaned.
The selection of the cleaning agent to be used is focused on the dirt to be removed, the material of the items to be cleaned and the quality of water used for automated cleaning.

High temperatures can accelerate physical, chemical and enzymatic processes and thus benefit removal of contaminations. Temperatures which are too high can, however, reduce enzyme activity. Another disadvantage of excessive temperature is the conversion carbonic acid contained in the water to carbonate via hydrogen carbonate which is then precipitated as a poorly soluble compound with the water hardening salts magnesium and calcium. This results in stubborn ‘lime deposits’.

An extended reaction time for the cleaning solution makes the removal of dirt from the surface easier due to better swelling of the contaminants and a stronger chemical decomposition of the dirt components.

The use of mechanical agents such as the use of brushes or pressurized water jets enables bonding forces between dirt and surface to be overcome such that dirt can then be removed more easily.
Chemistry, temperature, time and mechanics are the four components of the so-called Sinner’s Circle which describes the mode of action of the cleaning process and which was named after the chemist Dr. Herbert Sinner:

The circle diagram shows how the individual parameters are interdependent. Each parameter is variable in size. However if one factor is changed this will affect the size of at least one other factor if the cleaning performance is to remain the same. This means that a longer reaction time is necessary if there is a lower temperature in the rinsing process for example. A reduced parameter is thus compensated by the increase of another.
In addition to the four parameters of Dr. Sinner’s Circle, the type of dirt to be removed, the quality of the surface to be cleaned and the material of the items to be cleaned plus the water quality available are of decisive importance. 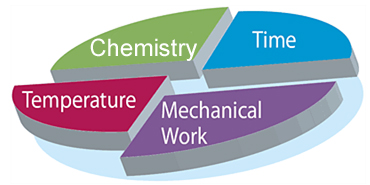 Here you will find an overview of all cookies used. You can give your consent to whole categories or display further information and select certain cookies.

Statistics cookies collect information anonymously. This information helps us to understand how our visitors use our website.

Content from video platforms and social media platforms is blocked by default. If External Media cookies are accepted, access to those contents no longer requires manual consent.